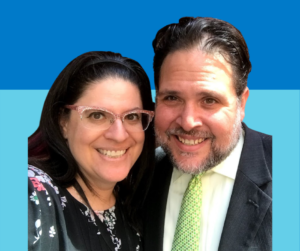 As a teen, Kyra became involved with USY because her mother was an alumna of the program and participated on Israel Pilgrimage in 1961. Mike joined USY at the encouragement of his friends who were already active in the program. Even though our paths had crossed multiple times in USY and Koach, it wasn’t until 1995 that we finally met over email via the USY Listserv. Eventually our friendship led to a relationship, which started (appropriately enough) while we were on Shmira together at Seaboard Region’s 1996 Spring Convention, which was also the site of our engagement one year later.

We are proud that our son Avi is a third generation USYer and that he has made USY his own. Our lives would have been incredibly different had we not been involved with USY. For Kyra, her participation in Israel Pilgrimage/Poland Seminar set her on the path towards her current career. We know we would have met eventually, but without USY it likely would have taken a bit longer to happen and certainly would have involved far fewer teenagers and far more sleep. USY provided us the safe space where we could learn, thrive, and be ourselves without judgement, and it has been important to both of us to give back to an organization that gave us so much.