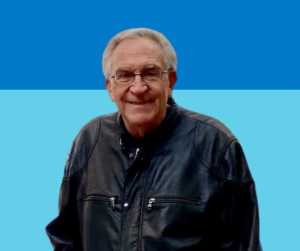 A note from Tep:

I can say with great certainty that, had it not been for USY, I would likely not have been involved Jewishly during high school and college, would not have gone to graduate school in Jewish communal studies, and would not have chosen a career in Jewish professional leadership. Many of my closest friendships began during my years in USY (both as a kid and professionally), many of my skills of leadership and community building were honed in USY (and nurtured at Brandeis), and my commitment to Conservative Judaism is a direct result of myriad positive and life-affirming experiences in Conservative congregations.

My involvement started in Randolph, MA as a youth advisor and co-director of the youth choir, followed by part-time youth director at Temple Shalom in Milton, a position I held for 6 years through graduate school at Brandeis’ Hornstein Program, until moving to Atlanta in 1976. I believe that the work in Milton and my graduate studies prepared me for the full-time job I held for 6 years as Program Director of the Ahavath Achim Synagogue in Atlanta. In both Milton and Atlanta, I loved the kids and their families, learned skills of programming and leadership development, and dabbled as a manager responsible for budget, personnel, supervision, and more. My job in Atlanta was a recognition that the kids in the youth program were also part of a synagogue family, taking a holistic approach to programming that enabled the kids to develop their own leadership and spirituality as individuals, and to then connect with their parents and siblings in synagogue-sponsored family Shabbat and holiday programming, havurot, and weekend retreats, among others.

Also during that period I was able to branch out into regional leadership at USY camps and conventions, attended USY International conventions as a staff member for New England and Hanegev, and served three times as a madrich on USY Israel Pilgrimage and once on USY on Wheels. All of this was happily rounded out with positions at Camp Ramah and Camp Tel Noar, both in New England. I also became active in the Jewish Youth Directors Association (JYDA) where I served as vice president and wrote the Advisor in Training manual, based on an advisor training program I led in Atlanta for 11th and 12th graders.

Moving back to Boston in 1982 to become executive director of the trans-denominational Synagogue Council of Massachusetts – a job I held for 33 years until retiring in 2015 – I tried to maintain my involvement with USY wherever possible. I became co-chair of my shul’s Youth Committee (Temple Emanuel of Newton), a volunteer position I held for 6 years and consulted both at Jewish camps and with youth directors and youth committee chairs as a way to share that which I learned over the years with people working directly with the kids in our synagogues and camps. I also helped develop and run YESOD (Youth Education: Securing Our Destiny) in cooperation with Boston’s Jewish Federation (CJP) and Bureau of Jewish Education to support youth programming in our congregations.

Finally, I was pleased to be granted several sabbaticals by the Synagogue Council, the last of which in 2007 when I wrote One Community, Many Branches: An Historical Overview of the Synagogue Council of Massachusetts, based on the 25 year history of the organization. At the Synagogue Council’s closing gala in 2015, I was humbled and honored to have been feted by over 400 members of the Boston Jewish community (and beyond), an evening which included performances by both the Zamir Chorale of Boston and Safam at which time I was invited to sing short solos with each group.

USY empowers thousands of Jewish teenagers to create exceptional Jewish experiences, yet it can do so much more than that. Please consider making a contribution to USY’s annual campaign to ensure that USY has the resources to operate, staff, and expand its programs throughout the Jewish world.

To donate to the newly named Alan Teperow Scholarship Fund for Hanegev USY, go to www.usy.org/honortep