USY Marches for Our Lives: Reflections from Teens Across the Country

This past weekend, on March 24, nearly 1,000 USYers across the country made their voices heard for what they believe in and participated in March for Our Lives.

Seizing the singular social action/tikun olam moment of their generation, they took to the streets to demand change. Read their reflections on the march below.

[Please note: All photos from the marches are courtesy of USYers, and were not taken by USY] 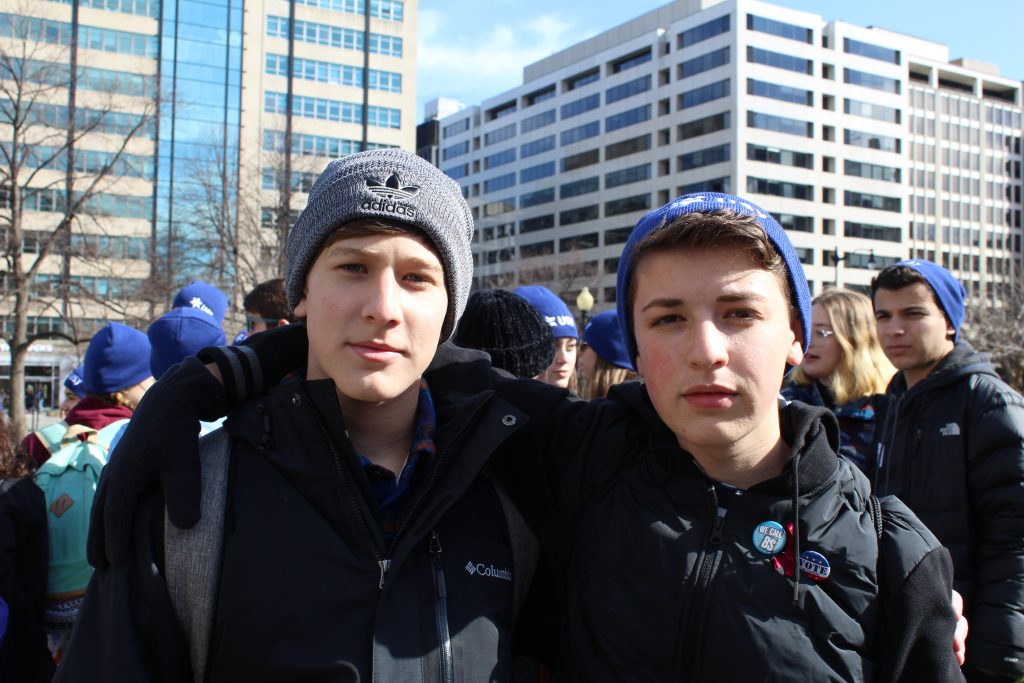 “From spending the weekend with USY, I learned that it’s important to think of my Jewish values whenever I decide to take some sort of action; it’s like a Jewish morality check. Everyone is stronger when they team up with their peers, and that’s what traveling with USY allowed me to do.

The Shabbat experience enhanced my experience of this pivotal social action movement because I realized that even in the darkest of times, Shabbat can give us that piece of mind needed to go out and do things like protest in the streets.” 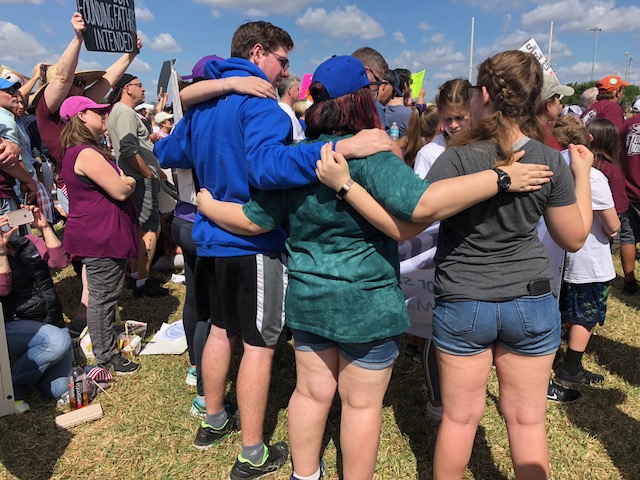 “On my sign I wrote ‘Guns have no place in schools’ and on the [other] side I wrote ‘I march with USY’…Even though there wasn’t a USY banner or a huge group of USYers marching with us, I felt like I was marching with USY.

With every USYer across the nation who was marching in their own city. I felt that power, energy and connection to every one of my friends, who are like my second family. I was marching for my life with USY.

I felt strong and powerful and most importantly impactful. Knowing all across the nation there were people marching with me made me know I was a part of something big that could actually make a difference.” 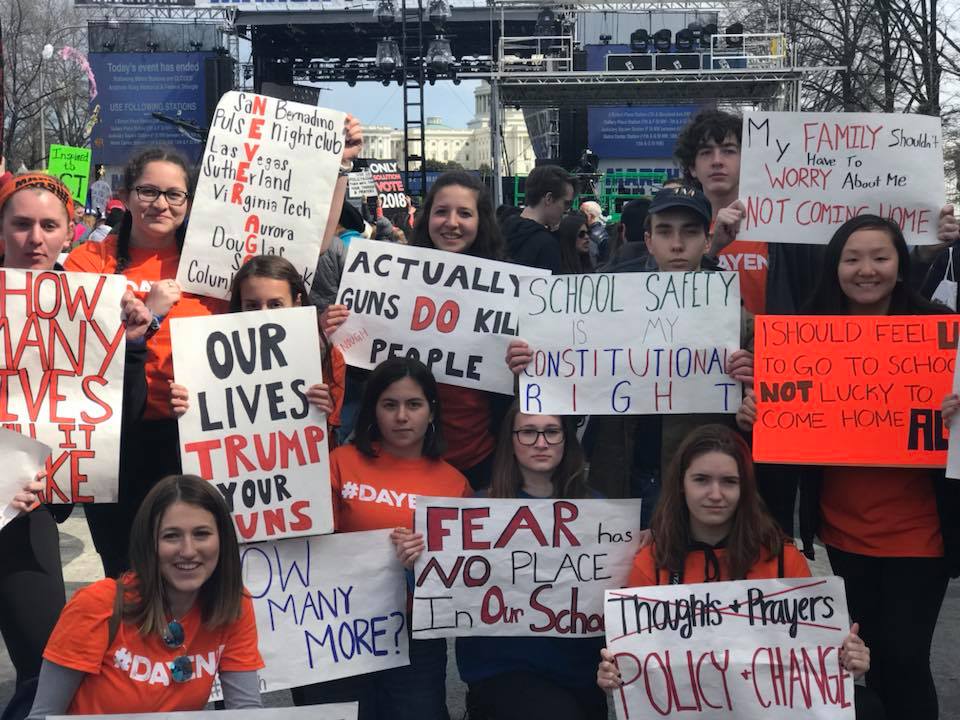 “USY is the community that connected me so closely to the Parkland shooting. Being able to embody the Jewish values I hold so closely to and [that] guide my everyday life while participating in the global movement helped my two worlds collide in an unexpected yet incredible way. 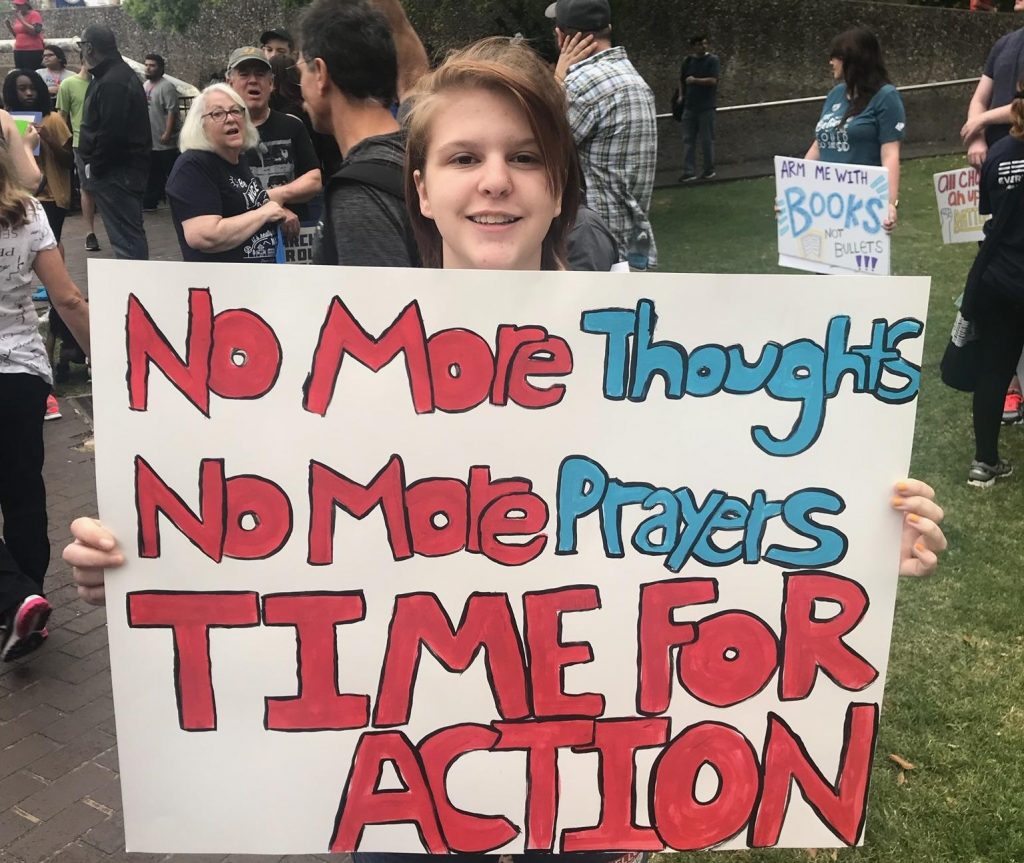 The most meaningful part of this experience for me was being surrounded by all these people who support the same cause. Seeing everyone’s signs and hearing everyone chant and shout and sometimes even cry, and seeing that while it is so easy to feel powerless in the midst of all this action, we’re not powerless. 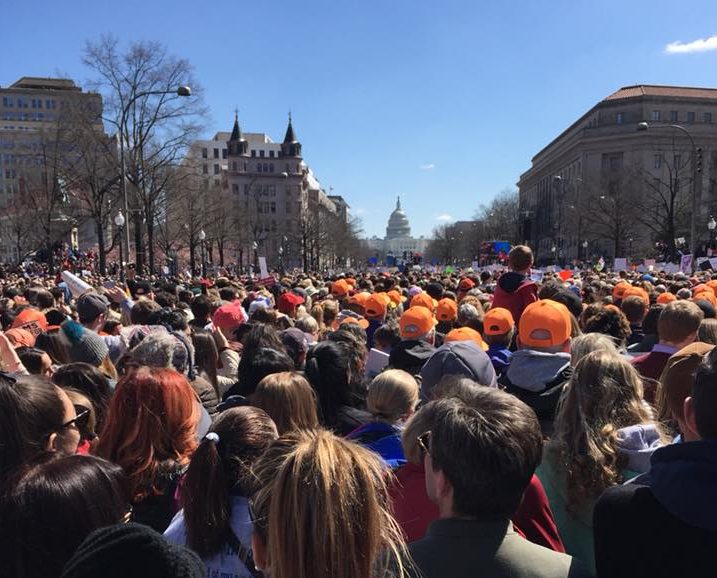 “It meant a lot to me to be able to observe Shabbat and take a stand for my beliefs. Being with friends made it much more meaningful and I was not alone. I enjoyed going with a group because I felt like part of a mini-community that was itself a part of a larger community.” 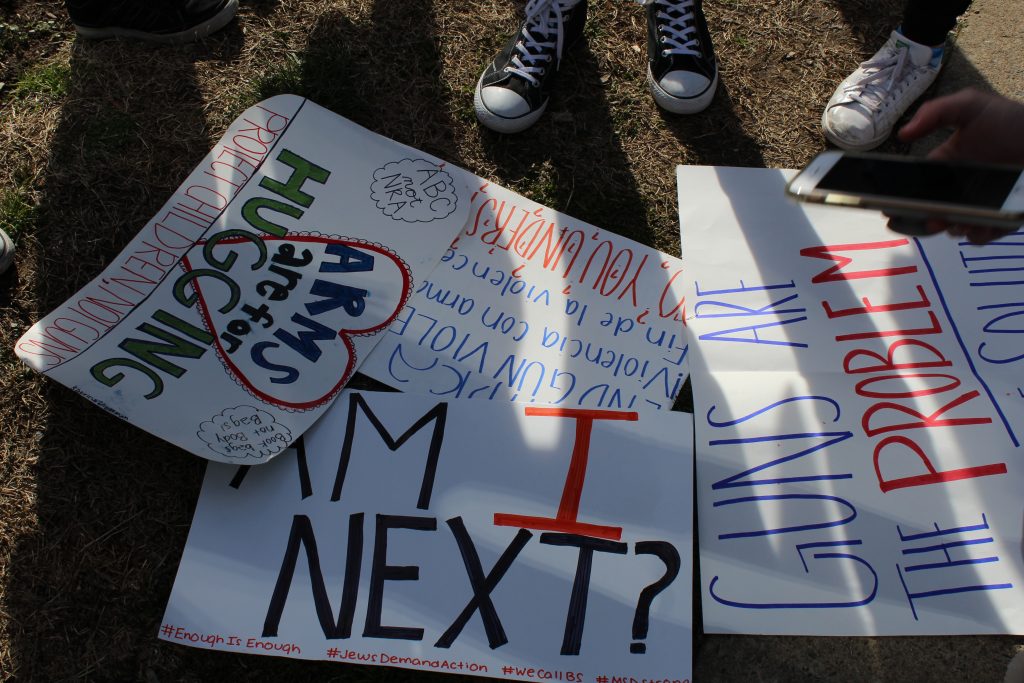 “Spending Shabbat with USY enhanced my experience of the march by clearly connecting it to my Judaism. I never felt that I was wrestling these two desires of mine, both to be Jewish and participate in this movement, because they worked together and I wouldn’t have experienced one the same way without the other.”

“Being with my friends and standing in solidarity with them was an amazing experience, and knowing that I was part of a movement which had my back was part of what made me want to attend the march in the first place.” 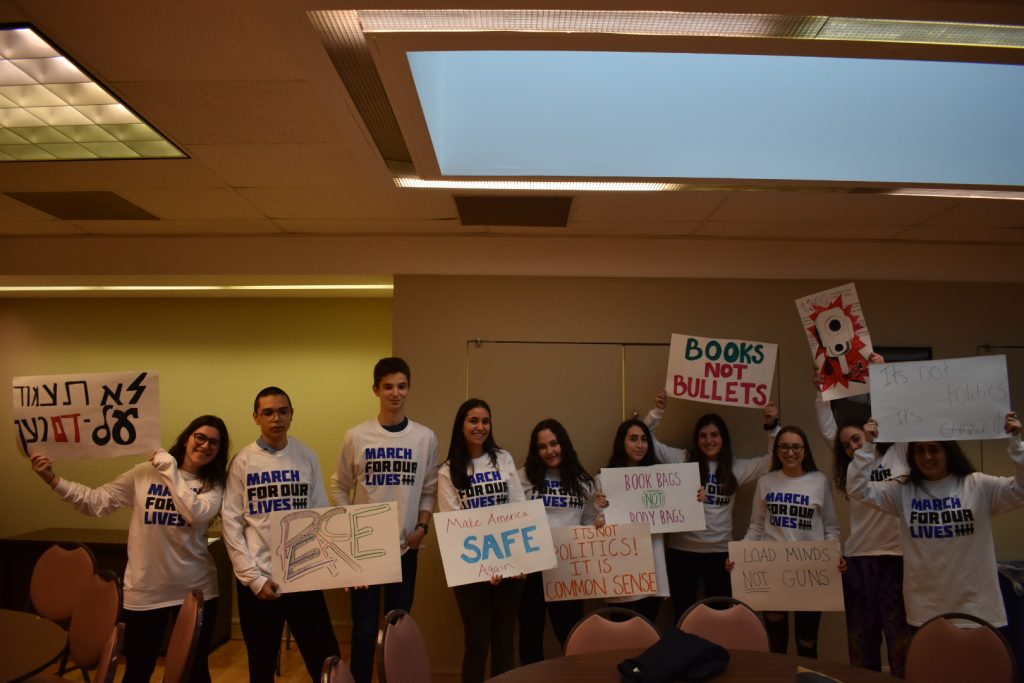 “The March for Our Lives was one of the most empowering events I had ever witnessed. It made it even more special to attend with USY. I had the chance to talk to kids all around the country about their communities…We also talked about how Judaism relates to the subject of gun control and gun violence. It was really cool how we connected modern day messages to certain parts of the Torah. The march itself was the single most awe-inspiring event I have ever attended, and it was awesome how I was able to march beside passionate USY teens.” 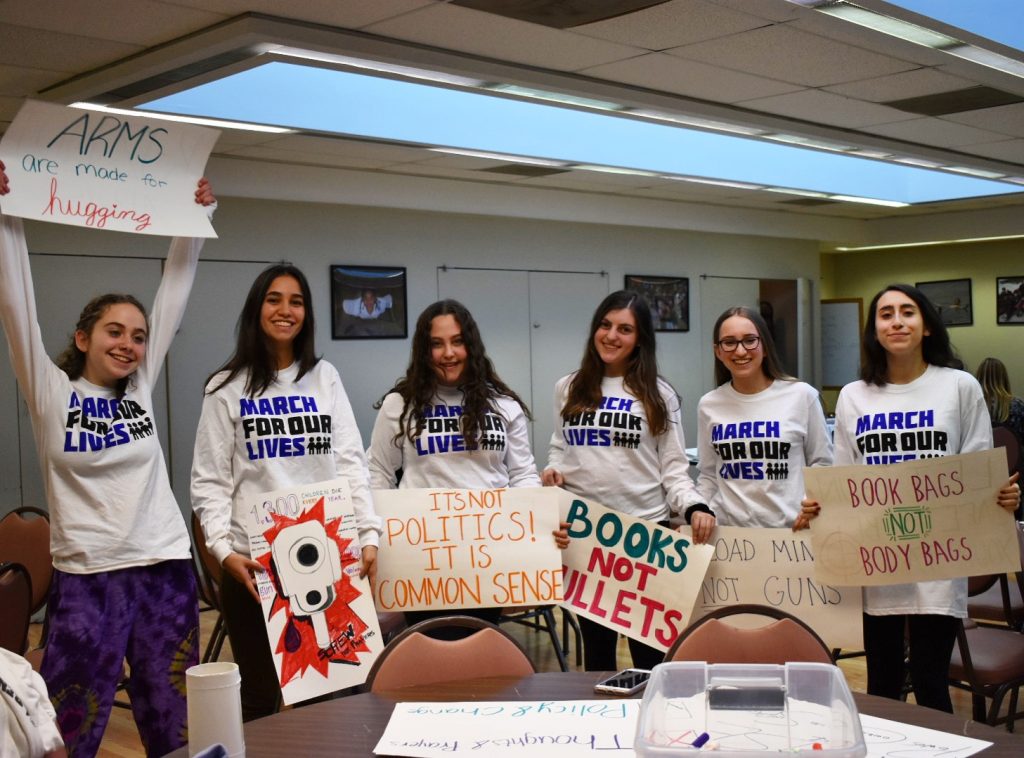 “We prayed with our feet this weekend. We stood together and took part in something truly amazing. Among the posters and the people listening to children pleading for our lives, I felt empowered and proud to be part of a generation that wasn’t going to be silenced and wouldn’t allow themselves to go back to sleep and forget.” 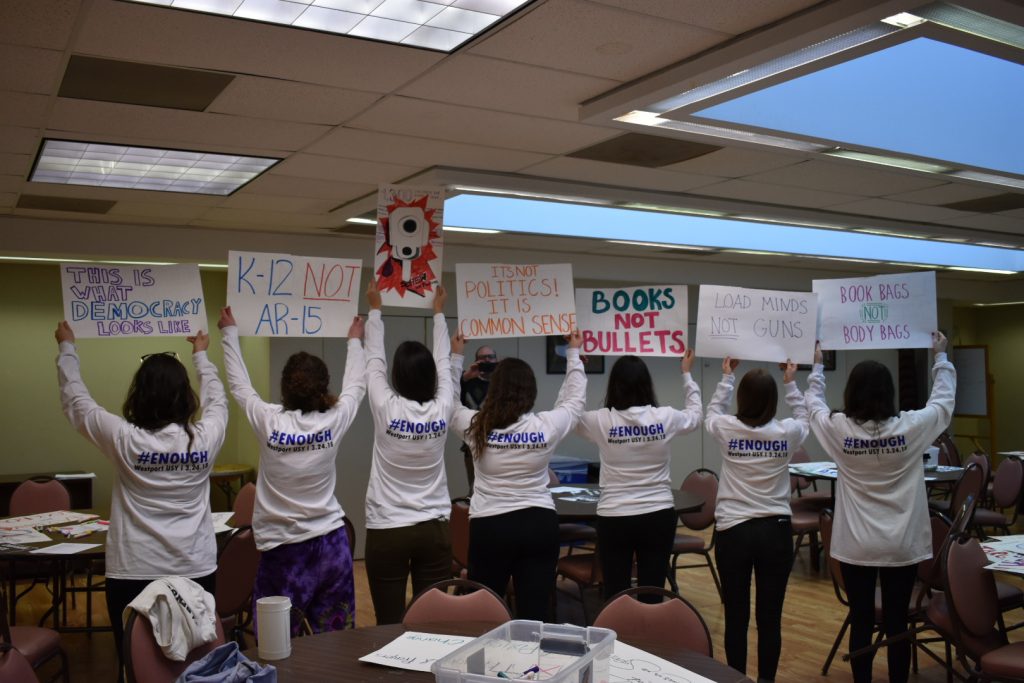 “Attending the March for Our Lives with USY was the most meaningful, motivating, and inspiring experience of my life.  Going into the event, I was excited to make a change.  However, it’s hard to truly recognize the magnitude of the issue and the power of the event until you are standing in a crowd of a million people, all of whom feel the same way you do about making this country a safer place.

Everyone was united in their hope for the future and strong belief that a change needs to be made for the safety of the current and all future generations…Attending the March for Our Lives was incredible in and of itself, but being part of it with USY made it that much more special.

To be part of such a historic event with other people my age, other people that think and feel the same way I do, made it all the more meaningful.

On the walk back to the synagogue we stayed at after the March, I discussed with other USYers how amazing it felt to be part of history.  We soon realized that, as amazing as it felt, we shouldn’t have been so excited to make a change because there shouldn’t have been a change that needed to be made.

As we arrived back at the synagogue, we were grateful to have been part of history, but also knew that we would have to work our hardest to ensure that this nation never needs to hold another march again.

I went into the March hopeful that a change would be made.  I left the March empowered that I, along with my peers, would be part of the generation that makes that change.”