Editors Note: March 1-3, USYers had the opportunity to attend a conference in Washington DC about the US-Israel relationship, during which they were able to hear from many diverse and interesting speakers and participate in many educational secessions. These USYers left with more knowledge to bring back to their peers. Benji Himmel, a Junior from Pittsburgh’s BSUSY Chapter in the CRUSY Region shares his AIPAC experience.

Shalom chaverim, I am Benji Himmel and I was lucky enough to join the USY delegation to the 2020 AIPAC Policy Conference. The conference was filled with engaging sessions, inspirational speakers, and lessons that I will be taking home with me. The conference started off with an amazing and deep general session with 18,000 people. The first presentation featured a Rabbi whose father liberated a Nazi concentration camp in 1945. The Rabbi said his father saw a crying child that he walked over to comfort. Then another rabbi walked onto the stage and stated that he was that child. This was an impactful moment that brought 18,000 people to stand and clap for the resilience of the Jewish people. While on stage, the rabbis brought the room’s attention to liberators, survivors, and the descendants of survivors. All of these people also warranted the support of everyone in the room. This set the tone for the days ahead: hearing the unique stories that bind Americans and Jews, and America to Israel. 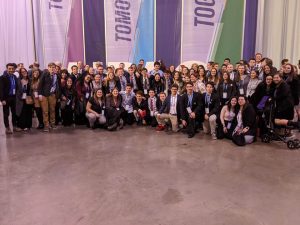 Following the first general session, the USY delegation attended the Innovation Showcase. This session featured Israeli innovators helping the world with a wide variety of inventions. One innovation was a new way to use sugar while keeping the same sweet taste with the need to use only half of the amount. Another invention allowed for neurosurgeons to be able to practice their operations prior to the procedure; something that has never been possible before. Also shown was an invention helping Israel, America, and allies of both. A “magic tissue box” that soldiers can carry around and holds a special type of fabric that camouflages soldiers and equipment to enemies and their sensors.

Next, I went to the Leadership Summit. Featured speakers at this Leadership Summit consisted of Stephen Harper, former Prime Minister of Canada and Samir Sharifov, the Minister of Finance of Azerbaijan. These speakers were two of many dignitaries from ten countries who spoke at the conference – the countries included Azerbaijan, Canada, Colombia, the Democratic Republic of the Congo, Ethiopia, Estonia, Israel, Serbia, the United Kingdom, and the United States. 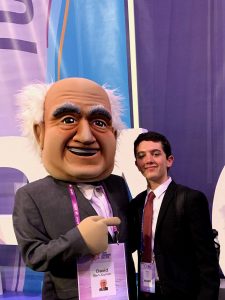 Later that night, I visited the AIPAC Village. The village was filled with interesting booths that featured dozens of Israeli and American organizations. The range of organizations that had booths was vast, from Magen David Adom to DouxMatok (the company behind the new type of sugar previously mentioned). The village was open for the entire conference, and was a fun place to explore in between sessions. Having so many different organizations in one location was very convenient because it made it easy to visualize the impact of Israeli companies on American lives.

On Tuesday, the last day of the conference, the Opening Session featured a panel of prominent Israeli journalists discussing the outcome of the previous day’s election in Israel. Following the final general session of the conference, I, along with other USYers, headed to Capitol Hill to prepare to lobby our senators and representatives for a stronger U.S.-Israel relationship. This was one of the most important aspects of the conference. As my senator explained, it is very important for us to physically be in D.C. to bring up our cause to our government. Following lobbying my representative, my AIPAC Policy Conference was finished, and I headed home. I returned home having learned so many lessons that I did not expect. What I gained from the conference is a renewed passion to stand up for Israel and the U.S.-Israel relationship, which is as important now as it has ever been.