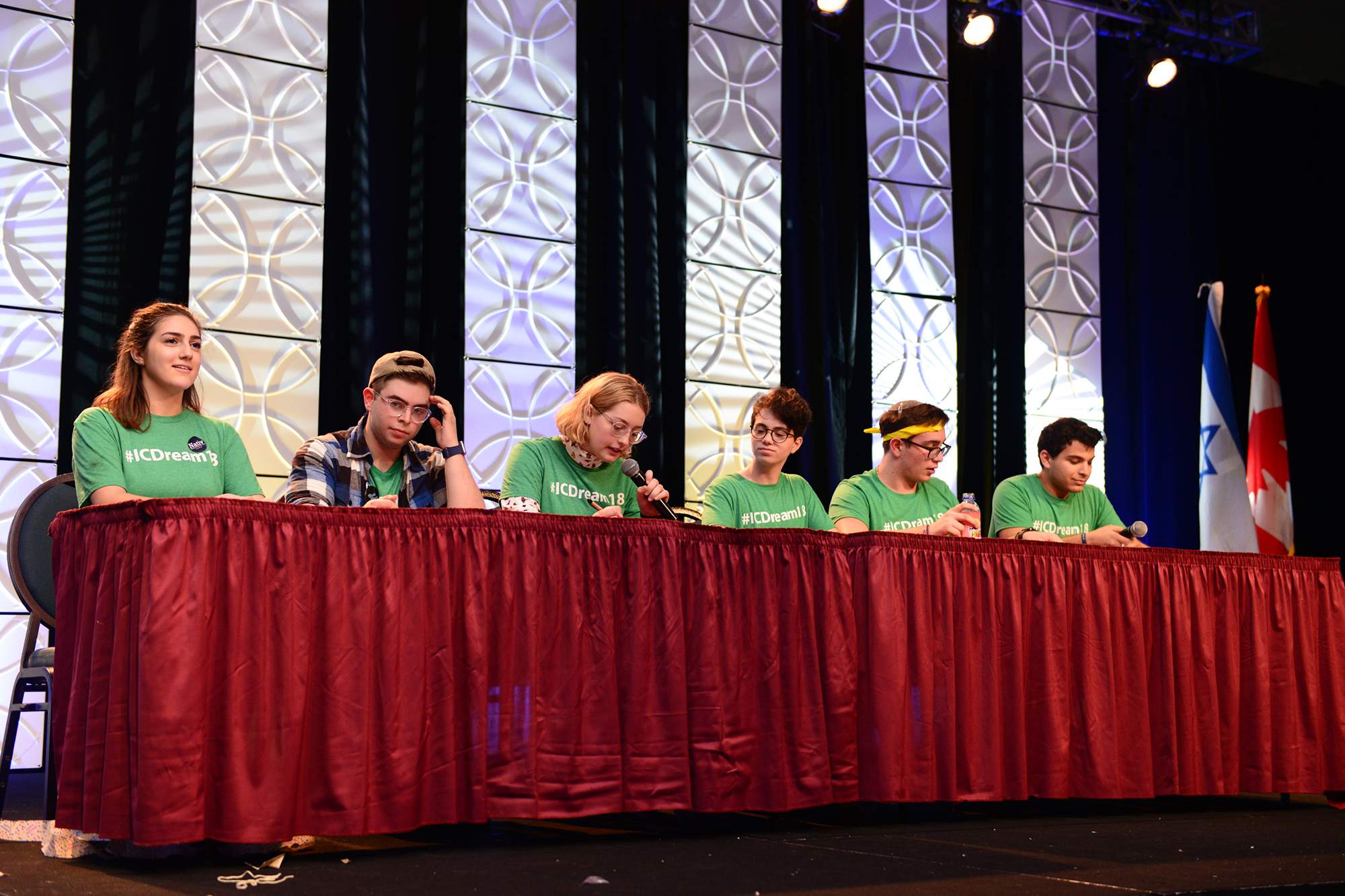 The general aim of the United Synagogue Youth program is to bring about a meaningful and fully reciprocal encounter of Judaism, the Jewish people, and the Synagogue on one side, and the Jewish teenager on the other. As a result of this encounter, the Jewish teenager will, firstly, demonstrate and experience how the Jewish way of living, through study, action and fellowship, leads to personal fulfillment and growth while meeting his spiritual and social needs, and secondly, make a significant contribution to his synagogue, community, society and the Jewish people.

Many of the problems that beset North American Jewish Youth can be attributed to our inability to accept our role as a member of Klal Yisrael, and that each Jew is responsible for the future of Judaism. The problem of inter marriage would not be as crucial if North American Jewish youth were more concerned with the survival of their people. USYers should be impressed with the Jewish mystique. The unique aspect of the Jewish tradition embodied in the privileges of membership and its contributions to Jewish civilization must be impressed on the youth of today. This is a difficult idea to propose to liberal thinking American Jewish youth, who will immediately associate chosenness with superiority. But unless they are made to feel that the Jews have a role to fulfill and that group survival is essential, they will not make the necessary effort to accept their responsibility as bulwarks against assimilation. USYers should stand at the forefront of cooperation with other Jewish youth organizations.

With increasing mobility of American Jews, these young people may never return to the community of their origin after leaving High School. An essential aim of USY should be to help instill a sense of loyalty to the Jewish community and the synagogue, so that they will seek out the synagogue and feel a sense of responsibility to enrich its program or provide viable alternatives to it when the program militates against self enrichment.

To this end, USY should provide our young people with a model, a blueprint of synagogue life as it should be experienced by an exemplary adult congregation.

In this way only will the youngster have a clear idea of what the adult synagogue should be, thus seeking its implementation in later life. The teenage model of synagogue life can conceivably influence the present adult congregation to seek higher standards of involvement. We should not underestimate the possibility of good ideas “trickling upwards.”

The organization should provide the opportunity to experience the Mitzvot both as a group and as individuals, in order to help all our young people make an intelligent choice as to the degree of their personal observance in later years. Shabbat, the Holidays, Prayer, Kashrut, Tzedakah, G’milut Chasadim, amongst others, should be stressed as imperatives derived from our tradition. A sense of those moral and ritual imperatives inherent in Judaism should be fostered. USY views the ethical and ritual areas as leading one to the other in thought and deed.

We consider it a responsibility of each group and individual to confront and internalize our cultural heritage via the study of basic texts, guided discussion and all other effective learning experiences.

USY program should center around the many problems with which USYers will be confronted at college. They should be exposed to authentic Jewish views on situation ethics, civil disobedience, protest, politics, inter marriage, pacifism, premarital sex, drugs, etc., so that they will know, and hopefully remember, that there are Jewish responses to current issues. The USYers should be prepared to discuss and articulate in college years some of the unique features of Judaism and its basic stand on important moral issues. This can only be accomplished through a well developed program of informal education with ample opportunity for discussion and debate. Such programs would require intimate involvement by the rabbi of the congregation.

The membership of United Synagogue Youth shall be comprised of Jewish adolescents of unlimited number between the ages of thirteen and nineteen.

Each chapter shall have the power to elect its Officers, levy dues upon its Members, and perform any functions necessary and proper for the general good and welfare of its Members.

Each Region may fix minimum and maximum age qualifications for Membership in United Synagogue Youth, provided they fall within the stipulations of this Constitution, or they may delegate such power to the constituent Chapters.

Any Chapter or Region which has been suspended or expelled may be reinstated before the conclusion of its period of suspension or, in the case of expulsion, at any time, with the concurrence of two thirds of the General Board and the approval of the International Youth Commission.

A suspension may be extended with the concurrence of two thirds of the Board and the International Youth Commission.
United Synagogue Youth and the Chapters and Regions affiliated thereof shall practice no form of discrimination or bias in the admission of eligible members.

Each Chapter and Region shall be required to observe the dietary laws, the Sabbath, and all other applicable Jewish laws in accordance with Conservative Jewish tradition at all its functions.

Each Chapter shall be required to provide a program of Jewish study for its members on a regular basis.

The aforementioned Officers shall constitute the Executive Board of United Synagogue Youth, which will meet not less than once per year at the direction of the President, and which shall act in both an administrative and in an advisory capacity.

The Executive Board shall meet, in addition, as soon as possible after the election of the officers who comprise it in order to appoint Chairpersons of Committees.

The Executive Board may, in addition, appoint such committees as it deems necessary. The chairpersons of such Committees shall be members of the General Board only with the express approval of the Executive Board.

The Powers and Duties of the General Board of United Synagogue Youth shall be:

Introduction: As leaders of USY, the Officers serve as accessible Jewish role models (dugmaot) to the USY constituency. In that capacity, they are expected to aspire to become ideal Conservative Jews, reflecting a strong commitment to Jewish survival and the performance of mitzvot.

Each chapter shall be represented at the Convention as follows:

The Executive Board shall have the power to increase or decrease representation within the indicated limits on an across the board basis, if it deems necessary.

A majority of the Convention shall have the power to determine the amount of the yearly dues to be levied upon each Member of United Synagogue Youth.

The fiscal year shall start on July 1 and end on the June 30 following.

All chapters which have not paid dues by November 15 shall be regarded as not in good standing, and may be denied the privileges of membership until the arrears for that year have been paid.

A petition signed by ten members of the General Board of United Synagogue Youth detailing the charges against the accused Officer must be submitted to the President and the International Youth Commission no fewer than thirty days prior to the trial.

No officer shall be convicted without the concurrence of two thirds of the General Board and without having had an opportunity to personally hear the charges and to present a defense on one’s own behalf.

When the President is tried, the Israel Affairs Vice President presides.

Punishment shall consist of removal from Office and immediate disqualification from holding office in United Synagogue from that time forward.

In the event of a vacancy in the Presidency, the Officers, excluding the President, shall nominate and elect one current International Officer to fulfill the duties of the absent President for the remainder of the term. If the Officers cannot come to a conclusion, the International General Board will be called upon to vote into office one of the five Executive Officers as President.

This Constitution may be ratified through the same procedures by which it may be amended.

In all cases where the business of United Synagogue Youth is transacted, a quorum shall consist of a majority of the members of the body in session.

The authority to interpret this Constitution and all rules, laws, and regulations made in pursuance thereof shall be vested in the Executive Board of United Synagogue Youth.

This Constitution shall become effective immediately upon its ratification. This Constitution and all rules, laws, and regulations made in pursuance thereof shall be the supreme law of United Synagogue Youth and all affiliated Chapters and Regions thereof.